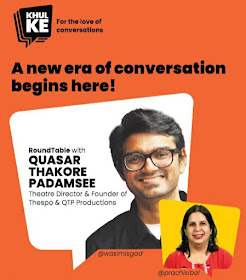 Quasar Thakore Padamsee is a theatre actor turned director who hails from a legendary theatre family. Born to veteran theatre actors Alyque Padamsee and Dolly Thakore, Quasar began his journey in the art from his college days. With over twenty years of experience in theatre acting, direction and production, Quasar shared four unique qualities or mantras for the budding actors at the RoundTable of the newly launched platform Khul Ke.

Khul Ke is touted at elevating conversation and is the only platform to allow video, audio and text-based conversations amongst moderator, panelists and audience. This session was moderated by Prachi Sibal
• Training or Riyaz: According to Quasar, rigorous training and practice is mandatory when it comes to a career in theatre acting. An artiste should constantly work on their craft to see growth
• Generosity: Human beings are the centre of stage who tell stories about what they love. They need to deliver to the audience without holding back.
• Sacrifice: In order to attain certain goals, sacrifices must be made, which can pave the path to the success
• Self Respect: People who are performing will be judged by the audience, criticised but will also be applauded in the end. Through all this, the actor needs to remain humble and have high regard for himself
During the pandemic, the entertainment and theatre industry were the worst hit. Talking about the theatre industry during the pandemic, Quasar mentioned, "Rules of theatre varied during the pandemic. We as theatre artiste and directors wanted to showcase some pieces virtually and realized there are many mediums to do so. However, the difference is the lack of involvement of the audience and the interactivity of the audience. If one laughs, the other audience members feel the emotions. Theatre should open back gradually as it has an ability to heal people"
Quasar Thakore Padamsee is best known for his works Mother Courage, Project S.t.r.i.p., A Peasant of El Salvador and Every Brilliant Thing. His new show will start staging in theatres from June this year.
Bharat Jesrani at 07:44
Share