Director Akarsh Khurana confirms on Khul Ke RoundTable, Mismatched 2 is under production and will come out soon. 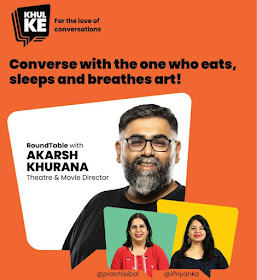 Akarsh Khurana is critically acclaimed for writing and directing a variety of shows and movies. Some of his most renowned works include TVF Tripling, Yeh Meri Family, Mismatched, Krrish, and Rashmi Rocket.

Akarsh shared his journey as a renowned director and screenplay writer in the film industry/ theatre and also spoke about the highly awaited Mismatched 2 at the RoundTable of the newly launched platform Khul Ke.

Khul Ke, is touted for elevating the conversation and is the only platform to allow video, audio, and text-based conversations among moderators, panelists, and the audience. The panelist for its flagship feature, RoundTable was the renowned director Akarsh Khurana. This session was moderated by Prachi Sibal and Priyanka Sharma.

Akarsh Khurana is currently neck-deep with the scripting of season 2 of Mismatched for which the fans all over have been waiting for after the super success of Mismatched S1. Talking about Mismatched 2 and the Tapsee Pannu starrer, Rashmi Rocket, Akarsh mentioned "Mismatched 2 is on my plate, for now, working on the script. I am really glad that even during the pandemic Rashmi Rocket got a release, it was on OTT and the audience got to experience it.

Akarsh Khurana has been in the entertainment industry since the age of eight through his performances as a theatre artist. Talking about his theatre journey, Akarsh gave a sneak peek into his love for writing scripts and directions but acting isn’t his cup of tea. He spoke Khul Ke about his style and interests " I do not see myself doing absurd theatre, I am more of a storyteller. I wrote Krissh when I was 24, I was not paid but learning, paved the way for who I am today. The first step is always the hardest. I do not enjoy acting as much but you can definitely say I am a passionate director", said Akarsh.

According to him, writing for films is tough vis-à-vis showcasing thoughts for theatre Theatre involves a fair bit of seeing things right in front of your eyes with stagecraft, which is the part I enjoy more. In theatre, casting is easy as the director knows the actor whereas casting for films requires due process.

"Actors choose their scripts, if the film fails at the box office no one is to be blamed, it was the actor who made that choice to do the film. An actor should do justice to the film through his acting and as a director, I'll do justice to my film through direction. In the future, I would want to explore the conflict of human relationships in my stories and characters. I strongly believe that content creation is all about the audience's reaction and our imagination is the biggest storyteller. A constant quest for the ordinary is something I truly relate to as the audience also wants an element of relatability on screen nowadays”, Akarsh shared

Akarsh Khurana is now gearing up for Mismatched 2 while he is still going through multiple scripts across interesting genres.