As a part of the relief efforts, the Foundation has set up temporary kitchens in both the districts and already served 20,000 people. 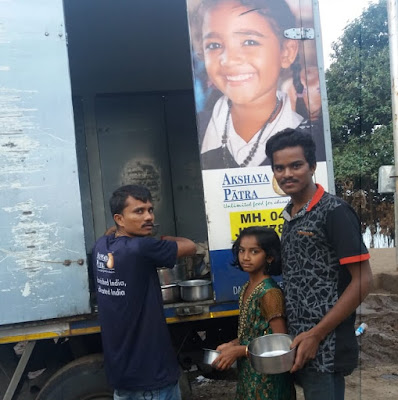 Kolhapur, 19th August, 2019: In the aftermath of heavy rains and resultant floods in Kolhapur and Sangli districts of Maharashtra, The Akshaya Patra Foundationhas endeavoured to provide essential food relief to the affected citizens of these districts at the administration’s request. The Foundation’s Thane kitchen is taking into account the gravity of the situation and extending support to the administration’s relief operation by setting up a temporary kitchen to provide lunch and dinner to those affected. A team of four staff and ten volunteers has been mobilised to distribute safe and hygienic food to people in the flood-affected areas.
Akshaya Patra has set up temporary kitchens in Kolhapur and Sangli. In the last four days, the Foundation has already served over 45,000 freshly cooked meals to more than 20,000 people. The food is being prepared in these temporary kitchens and transported to the affected areas through Akshaya Patra delivery vehicles. Dal khichdi is being served for lunch and green peas pulav is being served for dinner.
Amitasana Dasa, President (Maharashtra) - The Akshaya Patra Foundation, said “We have tried our best to provide freshly cooked meals to the people by setting up a temporary kitchen in Kolhapur. Yesterday we have started our second kitchen in Sangli. We will continue to work with the local administration and aid their flood relief efforts in the affected areas until the situation improves.”
Over the years, Akshaya Patra has actively undertaken relief feeding in different parts of the country, including Uttar Pradesh, Gujarat, Tamil Nadu, Karnataka and Kerala. It is the organisation’s firm belief that food is a vital necessity during such crises. The Foundation strives to utilize the capacity of its kitchens across the country to assist the Government with disaster relief work
About The Akshaya Patra Foundation
The Akshaya Patra Foundation is a not-for-profit organisation headquartered in Bengaluru, India. The organisation strives to fight issues like hunger and malnutrition in India. By implementing the Mid-Day Meal Scheme in Government schools and Government aided schools, the Foundation aims not only to fight hunger but also to bring children to school. Since 2000, the organisation has worked towards reaching more children with wholesome food on every single school day. The Akshaya Patra Foundation is continuously leveraging technology to cater to millions of children. Its state-of- the-art kitchens have become a subject of study and they attract curious visitors from around the world.
In partnership with the Government of India, various State Governments and inestimable support from many philanthropic donors and well-wishers; Akshaya Patra has grown from humble beginnings serving just 1,500 school children across 5 schools.  Today, The Akshaya Patra Foundation is the world’s largest (not-for- profit run) Mid-Day Meal Programme serving wholesome food to over 1.76 million children from 15, 668 schools across 12 states in India.
To know more: https://www.akshayapatra.org/
Posted by Bharat Jesrani at 05:14