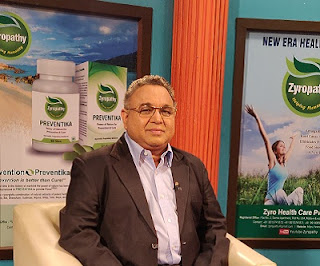 The cases of respiratory problems are on the rise and the biggest problem is the rise in air pollution. It has been proven through researches that as the temperature dips, the dust particles come down, and these air pollutants directly enter our lungs causing nose blockage, sinusitis, lung congestion, Bronchitis, Asthma, Pneumonia, Chronic Obstructive Pulmonary Disease (COPD), Interstitial lung disease (ILD), Shrinking Lung Syndrome (SLS), Systemic Lupus Erythematosus (SLE) and Lung Cancer.

The third issue is low immunity and the basic reason for it is an inbuilt nutritional deficiency in the food besides adulteration. Most of the grains, vegetables, and fruits we consume are poisoned due to the uncontrolled usage of fertilizers and pesticides. Immunity, whose basic job is to protect the body from external aggression and internal disorder, diversifies its resources to absolve the emergency situation created because of polluted food, air, and water. As the basic input to the body is progressively deteriorating in quality and is becoming unpalatable it is unlikely that our immunity will be in a position to perform its basic role resulting in increased ailments. The change in lifestyle has adversely impacted immunity which is the root cause of most ailments.

The fourth aspect which is continuously declining is regular physical exercise. The job requirements are changing and do not have consideration for the natural daily routine. The metabolic activity has reduced cellular functionality, which is the root cause of declining health. In such difficult habitat conditions, the body requires additional support for the upkeep and maintenance of immunity and health.

As far as remedies are concerned, it is suggested to avoid antibiotics, as they might give you immediate relief, but in the long run, they weakens the system and can have adverse effect on the body. It is recommended to go back to the roots and look at your kitchen as the key source of natural means of remedies. From ginger to garlic and turmeric to cinnamon we are blessed with very effective means of boosting the respiratory system.

Start having citrus fruits, which are rich in vitamin C and helps build up your immune system and also increase the production of white blood cells, which are key to fighting all sorts of infections

From early civilizations, garlic has been recognized for its value in fighting infections. It helps slow down the hardening of the arteries and is also effective in lowering blood pressure.

Ginger is another effective and natural remedy that can protect your respiratory system and helps decrease inflammation, which can help reduce a sore throat and inflammatory illnesses. It is also effective in nausea and cough. It also helps decrease chronic pain and might even help decrease cholesterol-lowering properties.

Apart from all these, you can also rely on natural herbs that are loaded with health benefits and can work as a shield of protection against your respiratory system. You can include herbs like Holy Basil (Tulsi),Eucalyptus, Thyme, Oregano, Peppermint and Mullein in the form of tea, balm, extract, and even essential oil to gain maximum benefits and keep the body safe from all side effects of respiratory problems.