~ The final episode of Behrouz Biryani presents The Royal Palate streams this Thursday,27th June on TVFPlay and The Timeliners (YouTube Channel)~ 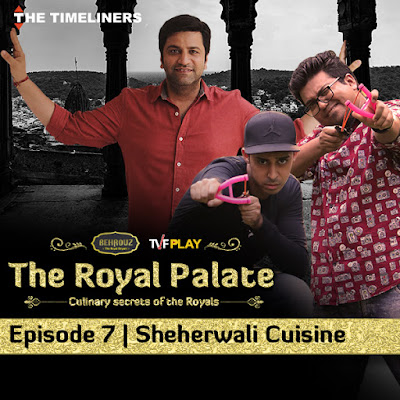 One of the most influential merchant groups from the British era is most definitely the Sheherwali community. Embracing the local ways of life, this community is extensively known for its unique blend of food. A combination of Mughlai, Bengali and Rajasthani influence, their eccentric cuisine can only be dignified as royal. In the final episode of ‘The Royal Palate’, celebrity chef Kunal Kapur traverses through Kolkata and Murshidabad to unravel the mysteries of this food.
Giving an insight into the journey of mangoes, the Dukkar family in Kolkata presented Kunal with an exceptional thaali, including sweets to sour, whose core ingredient is mango.  Proud to have provided the Queen of England for her special meals, they also showcased some of the original scriptures exchanged between the royals and them. Another local from Bengal, Neeta Ji makes us realize how this community’s food was not just for the mere survival of the traders but is royal on its own and is constantly evolving.
Most Sheherwali Jains settling in Murshidabad, Kunal’s excursion to Azimganj transports the viewers into the post-colonial era. Darshan Dudhoria, member of the Sheherwali Family of Murshidabad said, “West Bengal is extremely popular for its mustard and seafood preparations. However, hardly do people know about the Sheherwalis (Jain traders who settled ages ago in Bengal), who popularized this tempting strictly vegetarian Jain cuisine served as the ‘Sheherwali Thali’. I feel privileged to be able to bring out these rich flavours, making the food luscious without onion and garlic and present it in all its glory to the world through TVF’s The Royal Palate.”
Speaking about the richness of the culinary,Chef Kunal Kapur said, “Speaking about the richness of the cuisine, chef Kunal Kapur said, “Sheherwali’s had very close ties with the royals. Sheherwalis were not born in Royalty but their detailing in food was nothing less than “fit for royals”. It’s the finesse, opulence of Sheherwali food that gives us the understanding of what it is to live life king size!”
Concluding with our favourite Indian YouTuber duo – Jordindian, the episode ends with an authentic meal in the true Sheherwali attire donned by Kunal and the guests Naser Al Azzeh and Vineeth Kumar, embracing the fraternity.
So, tune in to TVFPlay this Thursday, 27th June and experience the Royalty
Watch all episodes of The Royal Palate here: https://tvfplay.com/category/12/series/606
Posted by Bharat Jesrani at 05:15