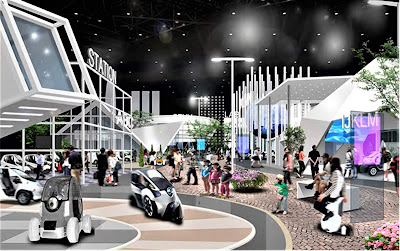 There has been a lot of hype about smart cities in the last few years. There is a lot of ambiguity on the definition of smartness of systems. Most of the people confuse smartness with the use of technology. The reality is that smartness is making the technology humane for efficient and optimum use for the users of public services. A smart city cannot be infused with just technology of connected/intelligent systems, it needs aesthetics and usability to enhance the landscape with covert and embedded use of technologies.
Through many of the surveys done by research agencies, a majority of people have rated transport as a top issue for the smart cities.
On a broad scale, a large metropolitan city can have 3 orbits of road transportation. This is depicted schematically in the figure below.
Out of the above orbits, las mile transportation is most chaotic and deficient in our country. There were the good old cycle rickshaw days, where the rickshaw could be hailed almost from the doorstep and would always drop one back at the doorstep. This would mostly happen in the small towns or in lesser developed cities. Then came the auto rickshaws and then the e-rickshaws. Mostly we can’t hail them from our doorstep and many a times they don’t drop you at the door step.
With the cities expanding and aspirations of our young population on the rise, few would like to drive the auto / e-rickshaws. They may demand more respectable jobs. Also with smartness being introduced in the cities, the chaos created by these modes of transport may have to be dispensed with. 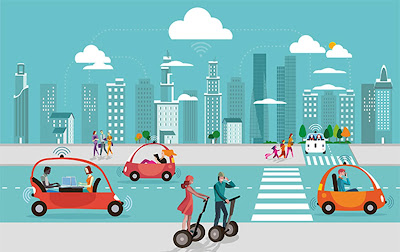 Also rising is the population of seniors. Children are becoming more mobile for their activities like sports and tuition, and our differently abled people aspire for inclusive public systems.
What we need is an ably managed last mile transport that is caring, that is smart, that does not pollute, that works on renewable energy, and so on. Our cities are crowded so we do not need hi speed last mile transport. What we need is a no frill, small footed (read footprint) electric/solar transport that moves around slowly in a defined ‘cell’.
Definition of a CELL could be a locality which is connected by metro and public buses. This locality is bounded or defined by a name. It has its own nervous system (read by lanes and labyrinths) and the last mile transport needs to cover each of these by lanes.
An example of a cell& a visualisation of last mile transport
A very thoughtful user centric design needs to be created which caters to the stereotypes and  behavioural pattern of our target audience (mainly seniors, children and differently abled) It should move in a designated narrow path and should be constantly on the move. Ideally it should be an electric vehicle with solar charging and should be able to accommodate at least 8-10 adults. It should be an App based connected vehicle with several well-articulated smart features.
Last mile transportation will also mitigate several problems related to chaos on roads, crowded parking spaces and pollution. We cannot blindly follow the benchmarks of other countries. It is imperative that Indian demography and behavioural patterns are unique, with verycomplex population dynamics. With the development of smart cities gaining momentum, it is an opportune time to develop our own last mile system that works consistently. We have to create a no-frill, frugal design that enhances our roadscape and is kind to our environment and people.
It is suggested that a template is created for dry run. During the dry run, we should refine the design to the hilt while plugging all gaps. After perfecting the system, it could be replicated across the city. To cater to the unique requirements of regions, small/big cities, one can follow the 80/20 principle, where 80% of the design is fixed and 20% is open for customisation.
Great transport system is the real identifier of smart cities. Last mile will show the empathy of the government towards people’s needs and solve many problems. 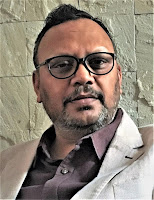 Anuj Prasad
Founder & CEO, Desmania, one of the best Industrial Design Studios in India. He can be reached at anuj@desmania.com