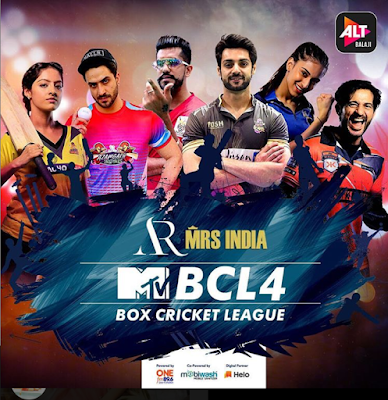 Summers just got a whole lot more fun for ALTBalaji subscribers as the immensely popular franchise – Box Cricket League (BCL) will stream on the app, starting today, Mon-Fri at 8PM. After 3 successful seasons of BCL, Balaji Telefilms brings back two of India’s greatest passions together cricket and total entertainment in season 4 of this sports reality show! Cricket, celebs and a whole lot of craziness, this season of BCL will bowl you over as friends turn into foes while fighting it out in the quest for ultimate glory.
With over 150 television celebrities competing against each other in the Baap of Reality Shows, there will be a total of 6 teams this year at BCL, including – Delhi Dragons, Goa Killers, Chennai Swaggers, Kolkata Babu Moshayes, Bengaluru Warriors and Azamgarh Royals. This unique collaboration of sports and television drama will keep the fans hooked to their screens as their favourite stars battle it out in the tournament.
Commenting on the launch of season 4, Nachiket Pantvaidya, CEO ALTBalaji and Group COO Balaji Telefilms said, “Delivering a complete package of drama, fun and competition, the new season of BCL will take the entertainment quotient a notch higher with unpredictable twists and high-voltage drama. With it set to stream on the ALTBalaji app, cricket and entertainment lovers from across the country will be able to enjoy the exciting combination of cricket and telly celebs on their screens, anytime, anywhere. We are glad to bring this sports reality show on our digital platform yet again for our subscribers across the country. ”
Some of the biggest celebrities associated with BCL include Karan Wahi, Kishwer Merchant, Pooja Banerjee, Deepika Singh, Parth Samthaan, Firoza Khan, Arshi Khan, Hiten Tejwani and many more.  The new season promises to be bigger and better than ever.


Watch the latest episodes of celebrity Box Cric
Posted by Bharat Jesrani at 06:08

Email ThisBlogThis!Share to TwitterShare to FacebookShare to Pinterest
Labels: BCL