Championship, organized by SportX Elites and played at the MCA Courts in BKC, Bandra. Rameez wins dual titles at the Elite Legends Championship 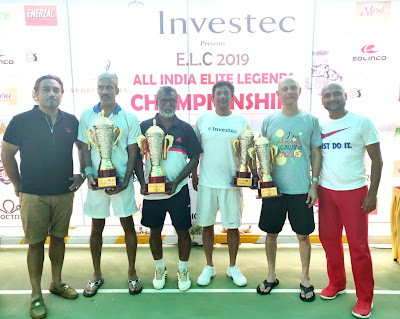 Mumbai: 52 year old Rameez Samad who hails from Chennai had a great weekend winning both the Singles and Jumbled doubles title at the inaugural Investec Elite Legends Championship, organized by SportX Elites and played at the MCA Courts in BKC, Bandra.
First up for Rameez was the Jumbled Doubles which the first of its kind in the history of Indian tennis, where 16 A players were mixed up with 16 B players on a draw based on chits and with winners playing with a different partner every round. After grueling 8 hours of jumbled doubles action, the top seed and national ranked player Rameez along with his partner of the final round S Chandran prevailed over Firdaus of the CCI and his partner and CEO and the title sponsor of Investec India, Ajeeth N securing a 7-2 win in a best of 7 games match to take the doubles trophy.
Rameez who played his singles final within a few hours of clinching his doubles trophy showed no signs of slowing down as he breezed past an extremely talented 53 year old wild card Nishit Pandey who created quite a buzz in the tournament beating some of the top players like Ajay Lakotia and Rahul Vyas to reach his first ever All India 50+ open final. Rameez beat Nishit by 5-2 in a final which was best of 5 games. .
Posted by Bharat Jesrani at 05:41

Email ThisBlogThis!Share to TwitterShare to FacebookShare to Pinterest
Labels: Championship