“I was a commitment-phobic before marriage”, says Angad Bedi

~The much-talked-about couple, Neha Dhupia and Angad Bedi indulges in an unfiltered conversation about their marriage, pregnancy and baby girl, Mehr, and much more in the upcoming episode of The Love Laugh Live Show this Saturday at 9 pm on Romedy Now~ 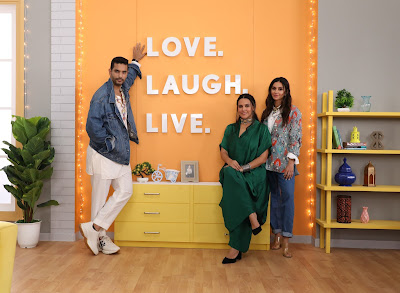 Mumbai, October 24, 2019:  Neha Dhupia and Angad Bedi’s secret wedding became the talk of the town, and now the power couple is all set to create headlines with their latest ‘unfiltered’ outing together on The Love Laugh Live Show with host Shibani Dandekar. The laugh-out-loud episode sprinkled with some outrageously bold statements will air this Saturday at 9 pm on Romedy NOW.
In a conversation about life after motherhood, Neha Dhupia said, “Post the birth of my daughter, Mehr, we have learned how to manage time. She has brought discipline in our (Angad and I) lives and my time management skills have become much better.”  When the host Shibani asked how she manages work life and a baby, Neha shared an interesting incident. “I took Mehr on the sets of a show which I was shooting when she was 3 months old. At a point, we had to take a shot and at the same time Mehr was hungry and needed to be nursed. I had requested the crew to look away and asked the director to take a close up shot while I was feeding her”, she said.
The duo claims that 2018 was the best year of their lives which not only brought them together in marriage but also saw the birth of their daughter. Angad, however, says that he was a different man before he tied the knot with Neha. “I was a commitment-phobic before getting married to Neha”, states the actor. Neha is quick to add that amongst the two, “I am always the one apologises and makes it up after an argument.”
Opening up about their hush-hush wedding, Neha makes a surprising revelation stating that “It was very hectic for us to arrange wedding outfits in such a short notice. I went to a mall to buy clothes but 3 hours before the Mehendi ceremony, I couldn’t arrange for the perfect outfit. I was shattered and  was indulging on cupcakes in the middle of the mall but somehow we managed! We bought our wedding clothes on a returnable basis from the designers. That’s the best thing actually as I don’t think I have enough space to keep that Lehengha.” 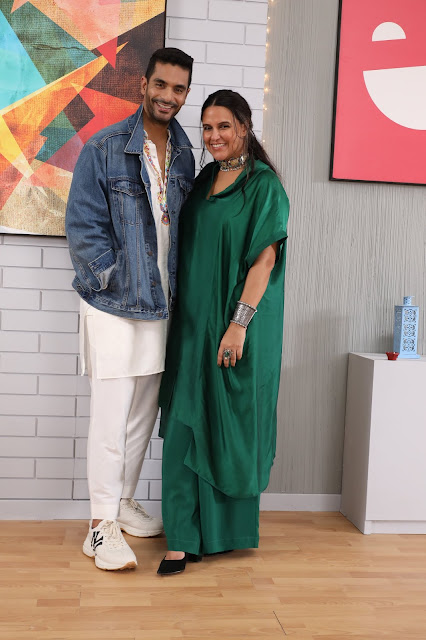 When questioned on Neha’s addiction with shoes and her owing a whopping 600 pairs, the actor laughingly shared her fear, “The freakiest thing about being pregnant was that my shoe size changed and I am not going to fit into that size again”. She also said that marriage and baby have taught her how to declutter her life and now her shoe collection has gone done by half.
Watch Neha Dhupia and Angad Bedi like you have never seen before on The Love Laugh Live Show this Saturday, October 26, at 9 pm on Romedy Now
Posted by Bharat Jesrani at 08:19