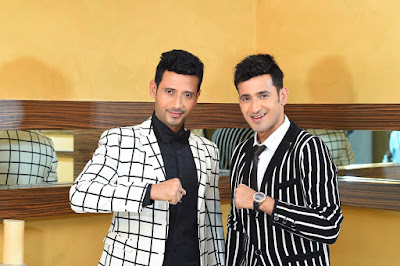 Meet Bros don multiple hats with equal ease and this time their Label MB Music is bringing back the most popular male voice of the 90s with the release of “ISHQ SAAF” a romantic song. Kumar Sanu’s songs rank amongst the Top 10 most viewed on YouTube Worldwide. The song is releasing today, 30th October 2019 across all platforms. It will bring back old memories and nostalgia is guaranteed to all its viewers.
This melodious song is written by Shabbir Ahmed, Composed by the versatile Meet Bros and sung by Kumar Sanu & Payal Dev. This video features you­­ng influencers Mrunal Panchal & Sanket Mehta and the video is directed by the ‘Bideowale Frame Singh’, the same team that directed the hit ‘Aawara Shaam Hai’ which trended at #1 on YouTube for over 48hours. We are hopeful that ‘Ishq Saaf’ is headed in the same upward direction.
‘Ishq Saaf’ is a simple story of teenage love that thrives despite adhering to their parents’ strict rules; rebellious yet innocent. A story repeated over time but presented in a different light.
Manmeet of the Meet Bros said, “It’s been over a year that we have been creating romantic melodies along with club songs and it’s exhilarating to see that people love this side too. After garnering great response for this genre of songs, we can’t wait to release ‘Ishq Saaf’ one with the Ultimate ‘King of Romantic Songs’”.
Harmeet of the Meet Bros said, “A voice that is undoubtedly the epitome of the 90s singing and has been an integral part of music lovers; bringing him back for ‘Ishq Saaf’ is the reason we love doing what we do for MB Music. We try to work with as many great singers as possible and this time collaborating with him created a different kind of magic to the song. This song is a romantic number that is not only melodious to the ears but also pleasant to the eyes.”
Kumar Sanu said, “When the Meet Bros called me to collaborate for this song, it genuinely reminded me of the 90s era. The song is urban but the vibe definitely brings back the romantic side of me. You will instantly feel connected with the song and fall in love with the music. I loved the process of creating art with the brothers and hopefully, we will work together for more songs in the future.”
Co-Founder and Label Head, Raajeev Sharma said; “I have been in the music industry since 1986 so have witnessed first-hand the rise of Kumar Sanu and in recent times the evident shift back to retro music. Melodies ruled in the 90s. This is a great song by the Meet Bros and Kumar Sanu is back with a bang”.
So music lovers have a reason to update their playlist because the song releases today. Stay tuned!
About Meet Bro
Meet Brothers are the Musical duo; singers and music directors who have given the entertainment industry various hits like Baby Doll, Chittiyaan Kalaiyaan, Hangover, Heeriye, etc. their 2019 release, Radhe Radhe & Dil Ka Telephone from the Superhit Film ‘Dream Girl’ are topping the charts. The duo is especially popular for their dance numbers that become an instant hit among the younger generation audiences. The last 9 months have seen many Romantic songs by them become hits, showing their versatility.


About MB Music
MB Music is the newly launched Music Label by the Meet Bros & Raajeev Sharma. The Label was launched in June 2018 and has since then given 12 Big hits, with ‘Mujhe Kaise, Pata Na Chala’ crossing 130M+ views. The channel has done 380M+ views on YouTube and crossed 2.3M subscribers. Apart from serving the audience with a variety of songs from different genres and languages, the idea is to also promote fresh and untapped talent in our country.
Posted by Bharat Jesrani at 18:55