Mai Hero Boll Raha Hu is an ALTBalaji action drama that needs no introduction. However, here are 5 reasons you cannot miss it

The action drama by ALTBalaji's Mai Hero Boll Raha Hu is a must-watch for these reasons. 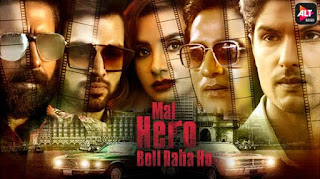 Do we need reasons to watch this one? I think we are all already there and already beyond convinced. However, here are five reasons Mai Hero Boll Raha Hu is a must-watch apart from the fast-growing popularity, the brilliant music, the flawless performances, and the revelations about Mumbai’s underworld. Get reading and go start watching this incredibly binge-worthy series today.

Mumbai in the early 90s

The period during the early 90s in Mumbai was a very colourful era. Smartphones and technology still weren’t a thing, and people relied on various other sources of entertainment. The film industry was booming. Bollywood is, after all, the heart of Mumbai. Witnessing all these details about Mumbai back then warms the heart.

The series will constantly have you wondering, what will Nawab do next? Action sequences and Parth Samthaan as a part of those action sequences that will make your jaw drop are major reasons to watch the show. The plot twists and mystery will make it difficult to peel your eyes away.

Fashionistas and even fashion-challenged can tell that there is something unique about the characters’ looks. The outfits and the makeovers the actors have undergone add to the appeal of the show. It has made every single one of the actors even more intriguing, and of course, it has helped in nailing their roles.

You know a series is mind-blowing when the lines in it are now at the tip of your tongue and constantly ringing in the back of your mind. You will soon be quoting Nawab at every opportunity you get, making you one of the most fantastic chap on the block. It is already catching on.

Last but not least, the man who plays the ‘Hero’, Nawab. He is someone you can’t help but fall for with his killer looks and brilliant acting. He has and always will be India’s heartthrob winning hearts in various shows and movies throughout his career. Mai Hero Boll Raha Hu got a whole new fan following just because of Parth Samthaan’s new avatar

Binge-watch Mai Hero Boll Raha Hu on ALTBalaji for your dose of entertainment!