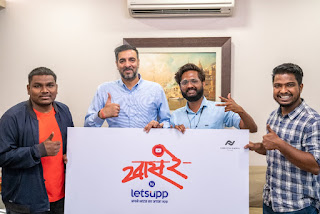 The digital space gained big popularity in the past year as online activity increased due to the pandemic. Many OTT platforms along with YouTube channels saw a massive increase in their viewership. Looking at this popularity and its bright future 'LetsUpp' which is led by Narendra Firodia recently acquired majority stake in the Marathi youtube channel 'Khaas Re Tv.' LetsUpp is

a hyperlocal vernacular infotainment app which gives regular updates on international, national, entertainment & sports news etc. with an aim to provide information on different subjects to the people in different Indian languages. Today it is one of the fastest growing mobile platform with more than 3 million global subscribers. 'Khaas Re Tv' is a digital entertainment company known for creating comedy videos, songs etc. 'Trump Tatya', a parody of 'Mulshi Pattern' trailer, Joe Biden's funny remix are some of their popular videos. Their recent song 'Usacha Ras' & 'Gavran Munde' which is the Marathi version of the Punjabi song 'Brown Munde' received more than 4 lakhs & 2.6 million views. Apart from these, they have also promoted many Marathi films which eventually got huge box office success.

'Khaas Re Tv' was started by Sanjay Shridhar from Barshi, Solapur. While studying in Pune Sanjay started doing wedding photography and that was the time when he gained interest in media. He then shifted his focus on video production and started 'Khaas Re Tv' with Mahesh Mahamuni & Krishna Jannu. In this journey Sanjay and his team's  'Khaas Re Tv'  gained big popularity. 'Pablo Sheth', 'Thet Bhet', web series titled 'Viral', are some of their trending videos. Their unique and engaging content also grabbed the attention of many marathi celebrities. 'Khaas Re Tv' which was started in April 2017 completed it's four successful years in 2021.

Talking about this investment Narendra Firodia says, " Over the time YouTube channels have gained immense popularity & I feel that 'Khaas Re Tv' has lot of potential to become one of the top most  YouTube channel. My aim is also to make good quality content for the mass audience. Along with this investment I will also give good infrastructure & mentor them for creating more engaging content."

He feels that digital content space is the next "Big Thing". Being the founder of many successful ventures in different fields, the entertainment field has always been his favourite. Along with this recent investment in 'Khaas Re Tv', in the past, he also invested in digital platforms like "WYN Studio" which is a content creation startup that creates content for brands etc. & "The Bridge," which makes sports-related content. A few months back Narendra Firodia also announced the launch of a new regional OTT platform 'Letsflix Marathi' which will feature originals, movies, short films, documentaries etc. The launch of these ventures in the entertainment industry shows his love and passion for this field. But very few know that he entered this industry back in 2012 with the start of "Ahmednagar Mahakarandak," which is a big platform for artists to showcase their talent. Today it has become Maharashtra's biggest One-Act Play competition.

With this investment, Narendra Firodia aims to give people more premium quality and engaging content. It will be very interesting to see what kind of different and unique content will be offered to the audience in future.