Minister Farkash-Hacohen: “We will make everyone know Israel is a world leader in safety and health”. 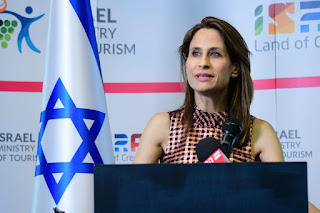 Wednesday April 28, Tel Aviv – Israel is reopening its doors to vaccinated tourists starting at the end of May, supported by the launch of a strategic campaign that ensures as many foreign tourist arrivals as possible in 2021.  The announcement was made by Minister of Tourism Orit Farkash-Hacohen on Tuesday April 27, 2021 at a press conference held in Tel Aviv.

“Israel today is a world leader in safety and health, and we will make sure every potential tourist knows this when planning their summer or winter vacation,” Farkash-Hacohen stated, “We cannot miss this opportunity – and, as minister of tourism, we won't.”

As part of its global campaign, the Israel Ministry of Tourism will launch signs in three major cities of Dubai, London and New York, all of which combine the potential for inbound tourism and a high vaccination rate.  The first sign will be put up in Dubai, both in English and Arabic, a historical step for both nations as it is the first time an Israeli campaign is being launched in the United Arab Emirates.  Additional billboards will air in New York’s iconic Times Square and London’s famous Piccadilly Circus, with different designs but with a common message: Book your flight to Israel.

“Dubai has great tourism potential for Israel,” the Ministersaid, adding “The UK and the US have always been large markets for inbound tourism to Israel. I have no doubt, we will see many tourists from all three countries within a short period of time.”

In addition to the launch of the campaign, the Minister revealed additional steps taken by the Ministry of Tourism in preparation for the recommencement of tourism in 2021.  The Ministry of Tourism is creating and promoting a number of large international events, each geared at keeping Israel in the hearts and minds of strategic groups of tourists.  The annual Tel Aviv Pride Parade is likely to be the only event that will be held physically this year; a special Abraham Cycling Cup tour, in partnership with renowned philanthropist Sylvan Adams, which will see Israel and the UAE co-host the annual Tour of Dubai race, and an international music festival in the stunning views of the Timna Park are a few of the events that will be promoted.

Farkash-Hacohen also announced the ministry would reinstate a directive incentivizing foreign airlines to operate flights to the Ramon Airport located outside of Eilat.  The incentive, which was in place before the COVID pandemic, is now being budgeted at a cap of NIS 25 Million, which will enable foreign carriers to receive financial incentives for every tourist they bring to Israel.

Before the spread of COVID-19 caused a nationwide shutdown in India, The Israel Ministry of Tourism’s India Office had started discussions with some of Indian commercial carriers to consider a new route to Israel - connecting Indian cities to the resort city of Eilat in southern Israel, known to the India market for MICE movements.  “In recent years, Indian travellers have become familiar with the cities of Tel Aviv and Jerusalem, and now we want to introduce them to the resort city of Eilat, on the shores Red Sea.  Once international travel resumes from India, we are confident that Eilat will be a destination on the minds of the Indian travellers, so we want to make progress with potential flight routes when the demand comes.” said Sammy Yahia, Director of Tourism, India & Philippines.

“Ensuring inbound tourism to Eilat is my obligation to the city's residents, but this is also a clear statement to the entire tourism industry: we are preparing for the resumption of tourism on a large scale as soon as possible,” the Minister said.

Speaking about the technical details, the Minister explained Israel would open to a limited number of vaccinated groups at the end of May, before allowing an unlimited number of groups to enter a month later. The plan, as she explained, was that in the month of July, Israel would open to independent vaccinated travellers, without the need to be part of an organised group visit.

“I know there is some criticism, and I can even agree with some of it,” Farkash-Hacohen said, stressing the plan wasn’t perfect but it was needed to ensure Israel maintained its position as a healthy country and not risk its citizens.  “We are gradually reopening tourism to Israel, to ensure we protect the health and wellbeing of all Israelis, while enabling those in the tourism sector to return to work and rebuild - and welcoming back the many people yearning to return.”

Israel offers a plethora of things to do and see to cater to the discerning traveller.  Tourism to Israel has steadily grown with 2019 seeing a record of 4.5 million international tourists as the nation houses a number of UNESCO World Heritage sites, including the Old City of Jerusalem, Old City of Acre and Masada (Dead Sea region).

From the historical city of Jerusalem to the beach city of Tel Aviv; the lowest point on earth - Dead Sea, to the marvelous underwater marine life of Red Sea in Eilat and the World UNESCO Heritage sites all across the country, experience the dynamic Israel.  Visit www.goisrael.in for more information