Have you ever looked for traditional artefacts to decorate the little empty corner of your house or ethnic paintings to adorn the walls of our home? We often come across paintings which are colorful and vibrant, depicting the livelihood, culture, tradition of indigenous communities. But how much do we know about these artisans?

Interestingly, Maharashtra, a treasure trove of rich culture and diverse heritage, is home to several such tribal communities, making about 73.18 lakh of its population. And unaffected by the progress made by towns and cities, these various communities have retained their unique art forms, which, though ethnic and simple, are colorful and vibrant as well.

Maharashtra Tourism gives a glimpse into one of India’s rich and celebrated tribal art forms, The Warli Art 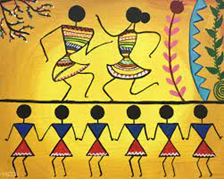 The Warli community is the largest tribe of the State. They can be found majorly in Palghar, Thane and Mumbai and near Gujarat border (Dadra & Nagar Haveli). Warli is the dominant community in Konkan with beliefs focusing on nature. The main occupation of this community is farming as the Konkan is a region with rich agriculture heritage. While it’s not clear about how long the Warlis have been around, Yashodhara Dalmia, an art historian and independent curator, claims in her book ‘The Painted World Of The Warlis’ that they are carrying on a tradition that dates back to 2500 to 3000 BC. 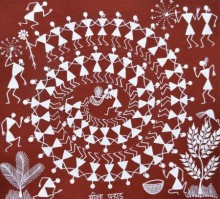 Warli art is today one of the most popular and easily recognizable traditional art forms of Maharashtra and has gained recognition among the urban population as well. Painted in white on mud walls, with occasional dots in red and yellow, the Warli art depicts the tribe’s traditional lifestyle. Using only a circle, a triangle and a square, the monosyllabic ritual wall paintings often surrounded the themes of hunting, fishes, dances, trees and animals. The symbolism in Warli art represents the circle of life. The triangle symbolizes mountain and trees. The square indicates a sacred enclosure for the mother goddess, symbolizing fertility, while the circle represents the sun and the moon. The upward facing triangle in a Warli painting represents the male while the downward facing triangle represents the female. Human and animal bodies are represented by two triangles joined at the tip - the upper trunk & the lower pelvis. One of the unique aspects depicted in many Warli paintings is the Tarpa dance. The Tarpa, a trumpet-like instrument, is played in turns by different village men. Men and women entwine their hands and move in a circle around the Tarpa player.

The colours for the paintings are made out of organic materials like natural gums (found in trees), clay from the mountains, rice flour etc. and the background of the canvas is painted in 3 colours: Black with charcoal, Brown with clay and Light brown with cow dung. It usually takes 15 minutes to 2 months to complete one painting depending on the size of the canvas and the detailing of the painting. These paintings are available in variety of canvas sizes and can be preserved for 20-30 years if they are framed properly. The paintings are now also done on paper, cloth, fabrics and canvas

Mohit Bagadia, Founder of Swadesee, an interactive travel marketplace, said, “Warli Art depicts the tribe’s culture, traditions and customs through simple shapes and figures that are derived from nature. It encapsulates the daily life of tribals and this is how the art form came into existence. Their idea was never to sell but preserve their culture through art. It was a way of life for them.”

“Another interesting aspect of this tribe is that elderly people especially widows are engaged to carry out Warli paintings on the walls of newly-wed couples’ houses unlike other communities. This art form was called ‘Suhasini’ (Ever smiling). Many Warli paintings also represent Palaghat, the marriage God and often include a bride and groom riding a horse. It is also believed that these paintings invoke the powers of the God”, he added.

The Warli artists have been invited to exhibit in galleries and museums around the world including the British Museum and Quai Branly in Paris. Their paintings are part of several collections of art connoisseurs and art collectors including Foundation Cartier of Contemporary Art, Devi Art Foundation in Delhi and private collectors such as Agnés B.

Late Jivya Soma Mashe (1934-2018), an artist of Maharashtra, popularized the Warli tribal art form not only in India but abroad in places like France, Holland etc. He was awarded Padma Bhushan for his art work. He was one of the pioneers who made the art on canvas. 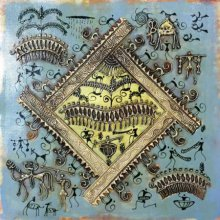 Authentic Warli painting on canvases can be bought from NGO AYUSH (http://www.adiyuva.in/2010/10/our-art-culture.html?m=1), which is run by the tribal community or www.swadesee.com. One can also visit Tribal Cultural Museum, Pune to see the paintings.

Tribal art form is a beautiful art of storytelling of a time and region and it needs to be preserved.  Maharashtra Tourism is committed to protect, promote and support the indigenous culture and traditions.